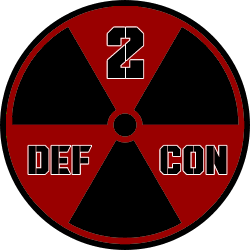 
What Is DEFCON 2 Or "Fast Pace" Warning Level?

DEFCON 2, or condition level two has also been called "Fast Pace" and is a "Red Alert" or red colored condition level. Fast Pace means we are at the next step to war or a nuclear threat. During DEFCON 2 the United States Armed Forces are ready and prepared to ship out in 6 hours time or less, hence the name "Fast Pace".

Defcon 2 is the second highest condition level, with only alert level 1 being higher than Fast Pace. The alert status may be changed to Defcon 2 after intelligence findings indicate a risk for an impending attack, such as the case in the Cuban missile crisis in 1962.


Defcon 2, or Fast Pace has been reached only once for the SAC, or strategic air command during the cold war Cuban missile crisis in October 26, 1962 after soviet missile pads were found in Cuba, but changed to alert level 3 after a short time.